It is sad how all CADing is still be done with proprietary software. Like: I use SketchUp, it's easy to use, but the full version costs and it's not made for technical drawing. So searched in the web and found many free CAD programs. But all of them were unusable for Sunday mechanic. Most of free linux programs had so steep learning curve or were just plain retarded from modern point of view. The only interesting thing I found was BlenderCAD. This is a project that tries to make plugin that converts existing and good 3d software Blender3d into CAD program. I have used Blender and it is a very good program for drawing, also many people(like Open Source Ecology guys) already use it for CADding. Unfortunately I can't talk more about it because I wasn't able to install it - a classical problem with non-pro linux users. 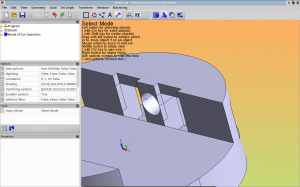 Later, while cruising around in RepRap wiki I found HeeksCAD. There were some problems with installing. I followed http://code.google.com/p/heekscad/wiki/UbuntuInstallation , but used too new Ubuntu for it, so I temporarily broke package system on one computer, couldn't install on other. They really should get it on the Ubuntu repositories. I would have made a donation to them with that comment, but they donate button is not working on my computer.

After installing I found myself from 3d space, much like SketchUp. But differently from SketchUp HeeksCAD is more number based CADing program and less like drawing. I watched couple of tutorials and tried a bit of modelling and I approve. I think this is THE CAD that I have been looking for. It even has CAM built in it. On the downside I couldn't find measuring button and the undo isn't working half of the times. But it still is very promising project. It will be one of the biggest hobby CAD programs around.