So I finally forced myself to try KiCad, yes, forced, their user interface is really so horrible. I decided to try KiCad because its one of the biggest open source EDA programs. Another option was gEDA, but KiCad looked friendlier. The reason I went away from EagleCAD is because it is controlled and owned by evil corporation. Its free and juicy today, but tomorrow you want to sell something you designed with it and you can't unless you pay 50$ (or 1494$ for full version).

First I had to make the schematic. I chose small and easy schematic - Attiny13, some pinheads and capacitors. Because It didn't had Attiny13 by default, I downloaded Attiny library from  http://www.kicadlib.org/ . Adding the lib was bearable. Adding the components was.. good? I liked the shortcuts version more than Eagles command line communication. But the user experience at whole was terrible. The graphic lagged behind, there were artifacts on the screen all the time. GUI and buttons were a little old looking and .. random. I wanted to add six same connectors and I had to click add button (a) every time. But like, searching from library was better than in Eagle. When moving components the wires stay in position what is silly.. But whatever, actually I love the library idea in there, totally makes sense and is logical. And the ERC is times better than Eagle. 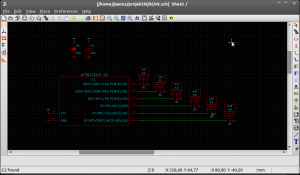 So next I had to annotate, sound reasonable, but why do I need separate dialog. I probably will use it a million times the configuration can be in preferences or wherever. Next fight with netlist generator. I didn't get that. Why do I have to press four buttons to generate nets. Not like there is more than one way to generate those. And later, I wanted to generate new version of netlist and there was no Save button, only Save As. WTF, I still have the same project, I change the components for like 20 times before I'm satisfied, why should you Save As, stupid!

After that - CvPcb. Basically you assign the footprints to components. I think that this is great idea, it brings down time to draw new components. And that IS important, because if you do something else than LED+Resistor+555 then you run into components/footprints/etc that is not in library. And it has online symbol generator too, brilliant. So tried to match my polarized capacitor to package, after trying all of the packages I gave up and took the SIL package. The GUI was frustrating again. I have to press some ultrasmall button in order to see what the package looks like. Totally not starter friendly. Although if you use it daily you will remember all of the packages. Later I found out that right polarized cap packages were available online. So.. I download the package and its useless, I need some random webpage's help even to make the most basic schematic. Bad. Then I chose DIL for AtTiny and started to look package for my 3 pin connectors. I tried about 3 different packages before it got to me that SIL (Single-in-line) is the thing I want. Again, Eagle has ruined my logic and simplicity of world. I just hate library management in Eagle, like, stupid. 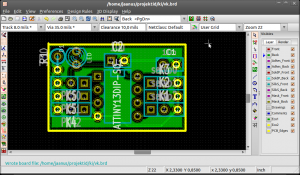 Finally, routing. I moved everything to place (I love those shortcuts) and started routing. First thing I noticed was the trace width: it was too narrow. So I read my tutorial, try to follow it, but there is no such menus. I find three more tutorials and still, I can't find such menus. I had different version! So half an hour of manual searching and menu digging later, still nothing. Okay, whatever, I can live with that. Routing was a bit stiff but nothing worth mentioning. The graphical things crashed, showed ghost airwires and made some other airwires invisible.. Again. Annoying. But I managed it, even the ground plane took only three tries to make.

So, KiCAd, I want to like you, but yea. There is just too many cliches, bugs and not enough user friendliness in it. But it is so close. If the developers would focus on GUI for a week and left that stupid autorouter to wherever it is then it would be real competition to Eagle. Good job!