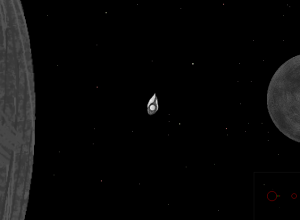 Flying between planet and its moon

So about a year ago, I started making HTML based game. Technology seemed ready enough and interesting so I thought to give it a try. After a bit of trying it came out that it is very possible to build real time space shooter game using only JavaScript and canvas element, in your face Adobe Flash. For now it has reached version 0.18. It features fast flying, realistic space physics, moving planets, minimap and more. Just go to page http://space.tech-thing.org and start flying. Goal so far is to have fun exploring the space and trying to control the spacecraft.

For graphics I chose Raphael JS library and for server communication and other tasks - JQuery. Space shooter game was selected because I like making physics engines, not games. The version number is so small because I have enormous ambitions, so about one day spent programming pushes the number about 0.01 forward. At the current version (0.18) there is only 4 planets, but I will fix it when my brother (the artist) draws more planet and sun pictures. More planets, naming, changing view size and more spaceships will be in version 0.2.

All planets, spaceships and their positions are stored in a mysql database. Cron job moves the planets once a minute. So they are moving, just so slowly that you can't see it. Game sends a query for planets every minute and, if you fly forward. For other ships I use long polling. Unfortunately Apache+PHP+MySQL isn't very fast combination. Or - they are fast but not real time. So that's why current FPS for other ships is - 5. I'm planning to move to faster server, don't know yet to what. First thought is Google appspot and Python because.. I'm familiar with it.

So yea, my little game project. I hope you have fun.