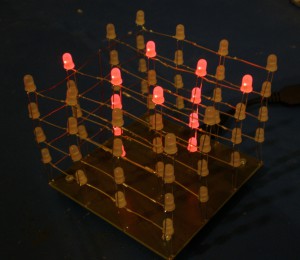 I needed a bicolor LED cube, so I designed one. One coloured cubes are useful only as toys so bicolor one seemed like the easiest to make. I used Atmega8u2 to control two TLC5926 and high side switching was done with four small mosfets. As a bonus feature I used NCP3170 to convert USB 5V to 2.2V more suitable for red and green LEDs. Using a switching regulator let me use power from USB more efficiently. 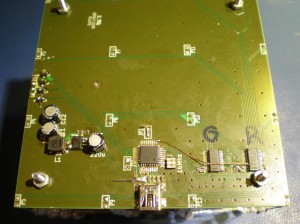 Bottom side of LED controller board.

My second led cube was much more ambitious - 6x6x4 RGB led cube. I planned to use one big Atmaga and charlieplex all the pins. I did the easy part - calculations, designing the system, routed and soldered the circuit board. Then I faced with the killer part - soldering 144 small surface mount three color LEDs to thin wires to form a cube. I tried couple of different racks but it was too time consuming to do even one. Some day when I think of a better way I will build a dozen, but for now it goes on my Out of Development wall. 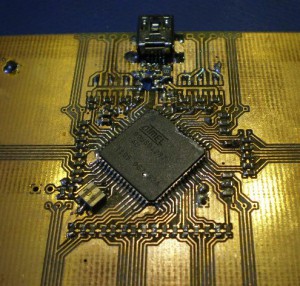