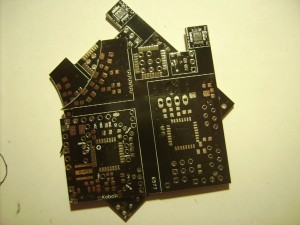 ITead Studio and Seeed Studio are selling PCBs at so ridiculously low price that I just have to make new projects. I just got my PCBs. I panelized six PCBs on one 5x5cm ITead order and Cmc demanded pictures, so here they are. I went with black board with tented vias, just to see how awesome they would look. And awesome they are. The designs on the board are: the latest Kobold, tinyDino, three boards for Golem, my Robotex robot, and a RF board for Matis. 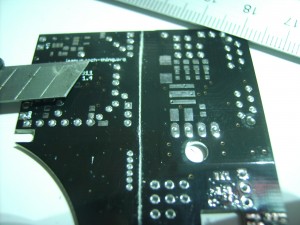 Cut the PCB with knife a couple of times 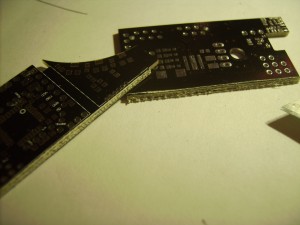 After breaking the border is a bit rough, try to align the cuts next time

At first I used dremel to cut the boards apart, but them Cmc told me to try to cut PCB with knife. Sound crazy enough to work. And after a little practice, it did work. It does require to cut several times from both sides, but it is order of magnitude cleaner and easier method than a dremel.

So, because my new design - Half Ohm, seemed ready enough, I ordered new PCBs. I used gerbmerge to panellize, because the Half Ohm is designed in KiCad and the other design I share board with - in EagleCad. After a small fight with conf files my gerbers were merged. 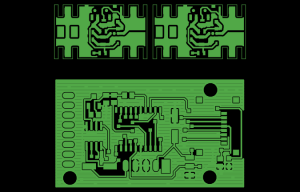 Design after merging with gerbmerge

And going to SMD really takes down the holecount on boards. Normal THT boards require 1 hole per leg. My last design has 74x 0.4mm vias for signal, while it has 100 component pads (not counting passives), also interesting is that I put 100 GND vias on 10x10cm board, that sounds much but one via per square centimeter isn't much at all, especially for medium power designs.