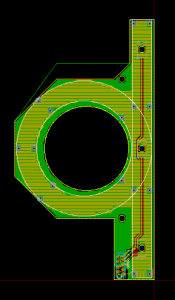 In summer I got a job to build a column heater for local biomedicine laboratory. They basically bought it from me so I can release  all the design to open source. You can build one yourself or if you don't want to, I can build more of these. There are commercial ones available but they are much more expensive than an university student.

Column heater itself is needed for ion trap mass spectrometry. Basically it is a process used to determine composition of biomolecules. They had Thermo LTQ XL (datasheet) machine for this. Their machines couldn't accept long columns. Workaround to this is to heat the column, so that is what I had to build. 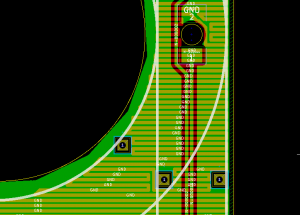 Close up of heating track

I built PCB heater, because this was the easiest idea to heat a surface. The idea came from PCB heated bed for RepRap. I milled out the heater from 18µm/0.5oz PCB. The track length is 37cm, width 0.5mm and resistance about 4Ω. Whole plate is covered with heat resistance lacquer CPL200H and  heated side is covered with cheap ebay thermal glue. The lacquer was advertised to have up to 100°C operating temperature, the same as my machine, but it started to smell at bit at 50°C.

Control circuit consists of small THT thermistor soldered to heater PCB. Electronics is in small plastic box and attaches to computer with USB. I used Erik's U4 devboard and soldered P-channel mosfet to it to switch the heater. The heating power comes from random 19V laptop power supply. The software is simple proportional PWM control that accepts numbers over virtual serial and reports back temperature it is at. I used teensy virtual serial example as a base. 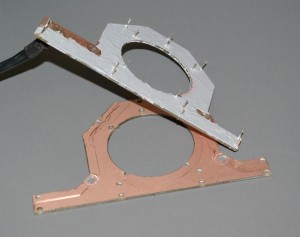 Self made column heater

Half a year or so later I talked with the people in the lab and they said it worked as it should. Got one picture of the ready made thing.