Do It Yourself reflow soldering

Since I was ordered many Half Ohms I tried to manufacture them faster. Fortunately Kalle had converted a grill to a reflow oven so I used that to reflow solder my boards. I had tried to do this before – and failed. The problem was that I had vias in components pads, so the solder was dragged to the via and half of the components ended up standing on one pad - “tombstoned”. Lesson for life – no vias in pads. New batch of PCBs had all the vias farther from pads so I got rid of that problem. 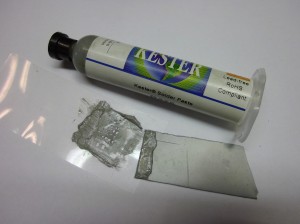 For stencil I printed the Adhestive layer (in KiCad, probably you can use Solder mask layer if you really want to) out on some random transparent paper leftover from making PCBs with photoresist method. Next I used scalpel to cut out all the larger pads (1206 component) and then poked holes to all the other pads with a tip of soldering iron. The result was ugly and non even. A bit of sandpapering both sides and it was fine enough for first try.

The solder paste I used was some three years old cheap Chinese one. Good enough for me but for real operations one should really buy quality one from real shop and follow the storing requirements.

I put the stencil on the board and aligned it more or less. Then used piece of plastic to drag the solder paste to board and took away the stencil. The paste got misaligned and was between the pins of SOT-25 chip but it all doesn't matter because surface tension does its magic. 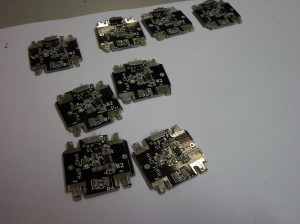 Boards with solder paste and components

Next – putting all the components in their places. Small tweezers and fun for two. Before this step the boards should already be in the oven or on a paper that you can use to transport your boards. 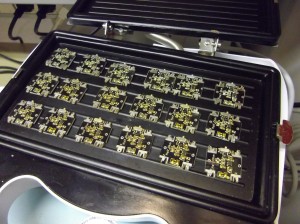 Boards in home made reflow oven

The heating itself was controlled by MCU in my case but the theory goes that first you heat the boards up to about 150°C for a minute, then heat it up to 350°C and turn off the heater. Or more ghetto way of doing it – put your electric stove to maximum and wait when the board starts smoking. Then wait for a little bit more and then turn off the stove. Either way the boards will smoke and it will look scary.

Finally – testing and fixing bugs. On my 18 boards with about 200 passives only 4 were tombstoned. Out of the 18 boards 5 had a short circuit between two SOT-25 legs. So next time I could invest more time than 5 minutes to making stencil.

Oh, and one more thing – don't try to reflow trough the hole parts. I tried to reflow golden connectors. The cold plating melted away from the connectors and they stick down to the oven. Also the boards with the connectors got gold plating on all the solder joints and the reflow oven got sticky.