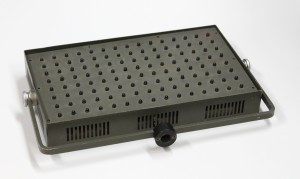 I have lately been doing bunch of different LED matrices. One of the most interesting one is an infrared matrix, made out of old Soviet infrared light that was used for data transmission (if I remember correctly - in studios). We repurposed it to LED screen that is visible only through cell phone camera.

We stripped out the insides of the device and mounted in our stackable led controller boards (link to github source). These two boards are designed to convert random amount of LEDs to Arduino controlled matrix. There is high side controller - 8 P-channel mosfets per board. And low side controller uses TI TLC5940 16 channel led controller. Low side board is stackable sideways, since I originally used it to control 8x70 matrix made out of cell phone backlights. 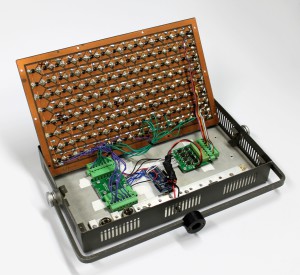