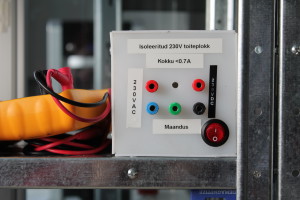 Finished isolator on the shelf with Estonian labels.

Probing mains powered schematics is hard. Most oscilloscopes are earth referenced, so connecting ground probe to random spot of mains connected device will make a small explosion. Also there is the risk of electric shock by touching wrong part of the schematic while being in contact with something grounded like a desktop computer case.

To combat these dangers I built an isolator box. I took an 1:1 transformer rated for 230 VAC 50 Hz mains voltage used in Europe. With 0.76 A current output capability it gives me ~170 W to play with. To make it even more useful I added a second output that goes through a diode bridge and has bunch of filter capacitors. This gives me rectified DC voltage to use, since most schematics rectify it anyway. 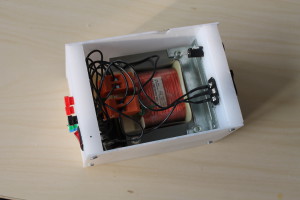 Insides of the isolator. Most of the weight and room is taken by transformer. (Fuse not wired yet)

For electronic construction I didn't use any PCBs. There was only a handful of components and all of them are really big and chunky so I just wired everything together. For front panel I used colour coded 4 mm with 19 mm pitch and illuminated power switch. I added fuse holder to the back, since I like to not die when working. First I tried quick acting fuse, but transformer inrush current blew it, so I settled with slow acting one.

Mechanical construction was done quite hastily. Front and back panels are made out of 15 mm polyethylene sheets. I cut the sides out of 2 mm acrylic sheets I had lying around and screwed to front and pack panel. Heavy transformer is screwed to back panel and lies on its side to provide support.

First test were successful, powered some schematics and probed random parts of it happily. After turning on high power portion of the schematic the fuse blew and no smoke escaped. So win for protection.

One thought on “Mains 230VAC isolator”