I looked at commercial reflow ovens and saw that they are expensive. That is a pity, because the hardware in them doesn't cost anything (Yea, I know, the development costs). 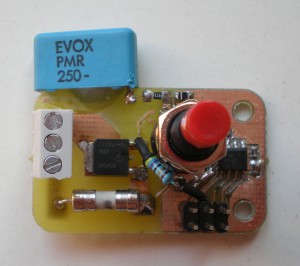 Debugging the prototype was quite "fun". On line regulator meant that my ground was actually quite close to line voltages, so the probing was pretty dangerous. To use oscilloscope I used one channel as a virtual ground and divided two channels with math.

I got the regulator and zero volt crossover detection working but the TRIAC drive circuitry didn't work. The code was finally working, but I managed to blow the TRIAC somehow. I used small pulse after each zero volt crossover to turn on the TRIAC for the next half cycle. It brought the projects energy consumption quite low, only couple of mA. This allowed me to use quite small (100 nF) mains rated capacitor for the regulator. 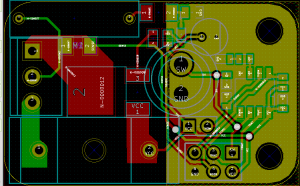 At some point I decided to stop this project. Debugging it was too dangerous and I had made couple of bad design decisions. Like believing screw terminal over 300 V rating. Line voltages and 3.5 mm pitch screw terminals shouldn't go together.

Get the source files from GitHub

Since I still needed a reflow oven: I took a sandwich grill, added a thermistor, a small 5V relay and simple atmega32u4 devboard. Half an hour of coding later and now I have a reflow oven. PID controllers and thermal profiles are overrated, everything works perfectly with "go to 220 degrees then shut down" logic. 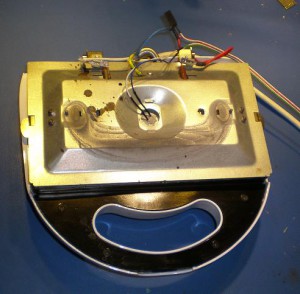 Final oven assembly. Thermal glue is holding the thermistor and relay is soldered on the wires.