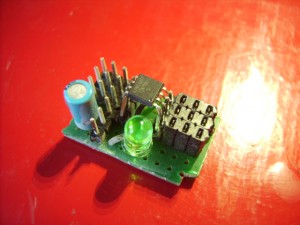 I made 3 channel servo controller out of AtTiny13a. AtTiny reads 3 ADC channels and moves servos accordingly. So one DIP8 package chip takes analog reading for example three potentiometers and controls three servos according to the readings. I chose AtTiny13 because it is one of  the smallest and cheapest MCUs I could get my hands on.  The code converts 0V to 0ms pulse and 5V to 2ms pulse. It uses all 6 i/o pins (including reset) of chip so if you want to use the chip again you need fusebit doctor or hvsp programmer. Code is 100% by me and in C, includes comments in Estonian. 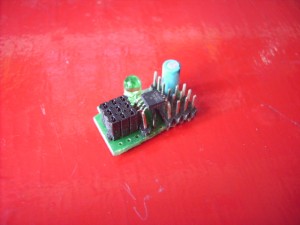 My SO8 to DIP converter

The servos connect to pins 5-7 (PB0-PB2) and potentiometers to pins 1-3 (PB3-PB5 (ADC0, ADC2, ADC3)). The example board was made out of protoboard. The pictures show of my pretty SO8 to DIP. I didn't have any DIP package AtTinys so I made this P2P CMC style adapter.

The video in the bottom shows little robot arm made from this servo controller and three 3.7g servos. It moves very jittery in the video because the video was made with the old version of the code. Also the servos are too weak for all this force.