This tutorial shows how to modify and minimize small servos. 3.7g and 2.5g servos are very handy in small designs because they are cheap, small, and have built in controller and gearbox. However to use them in continuous rotation mode some hacking is necessary. I'm using these servos on my nano sumo robot so I also have to modify servos to be smaller. 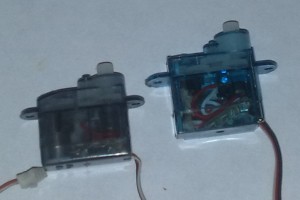 There are two kinds of small servos that interest me: 2.5g and 3.7g. These are the smallest rotary servos I could find from internet. Both of them are easily modifiable and easy to use. Differences between them are:

So they have minor cosmetic differences but the insides is exactly the same - same motor, same gearbox, same electronics. 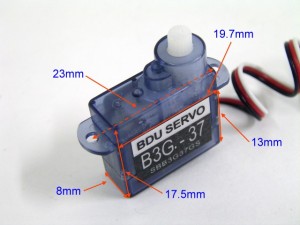 So getting it to continuous rotation is the same as with other servos: Pop out the potentiometer and solder two 2.2k resistors on its pads. Now to the hard part - making it small.

My goal was to fit two servos and wheels to nano sumo size (25x25x25mm). Also I wanted that my wheels were on same axis. After lots of measuring and drawing I came to conclusion that the only way to accomplish my goal was to make the gearbox shorter. So, lets do it!

Warning: I destroyed about 4 servos while making first prototype. 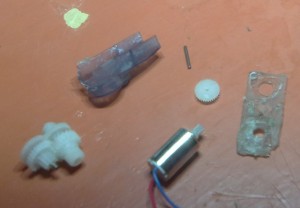 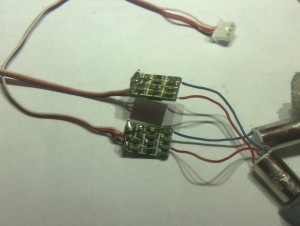 Electronics with some extra resistors soldered on it

Electronics need hacking too. You need to unsolder the potentiometer leads and solder two 2.2k resistors in place. The value of the resistors is important, servos I used had 4.7k pots and according to servo driver ic chip I can't solder whatever to there.

Both resistors connect to pad where the pots middle lead was connected. On my board it was unfortunately the left one. For maximum smallness I soldered one resistor in 0603 package from center pad to left one and other one standing on right one. Then I used piece of pin to connect other end of resistor to left pad. Its ugly but small and most important of all - works.

And because this is after all Kobold mechanics tutorial then I have to include how to make Kobold compilable wheels. First, take M5 wide washer (DIN 9021) and a random servo horn. then press them together. Then apply some glue and cut off everything you don't need. Yai! Now more pictures. 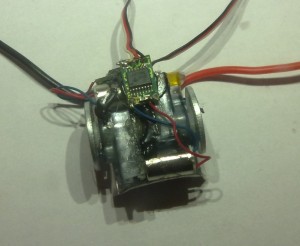 Finished second generation mechanics! And yes, thats a uC as a roller.. 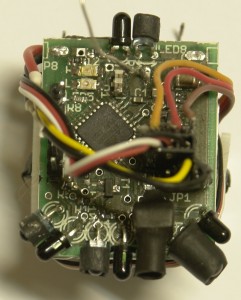 First version electronics, processor and most of the sensors are visible.

The goals of the first version electronics is to have simple enough board for home etching and to test all ideas and components I had. Also this was my first SMD project so I didn't dare to compress everything too small. The smallest things are in 0603 package.

The board uses atmega88 MCU with 12Mhz resonator. It has in circuit programming connector but unfortunately no debug/UART connector. It uses LDO 3.0V regulator in SOT23-5 package. I chose 3.0V because all components work on so low voltages and lipo battery gets to 3.2V when almost empty. There is MAX1555 IC for charging. It charges with maximum current of 200mA, so fully charging takes about 2.5 hours. Input voltage must be between 5 and 6V. It features charge contacts so no help is needed for charging. Also there is a voltage divider so the MCU can measure voltage in battery and go to charging at the right time. For output it has two LEDs: one green, the other one - red. Also there is plugs for servos and battery.

It has four infrared LEDs controlled by one mosfet. LEDs are for communication and distance measurement. They are rated about 1.2V and 50mA, but I use them at 1.5V. Next to every LED there is a phototransistor. Every phototransistor is connected to different ADC port and they can be used for ambient light detection, distance measurement, communication and angle measurement. On top of everything there is a 38kHz modulated IR receiver. I plan to use it for remote controlling, beacon finding and also to test how possible is to use it for distance measurement. Finally there are two whiskers in the back, they enable the robot to sense if it is on conducting surface like metal.

The schematic and the board can be downloaded from here. Its a tar archive with eagle files in it. 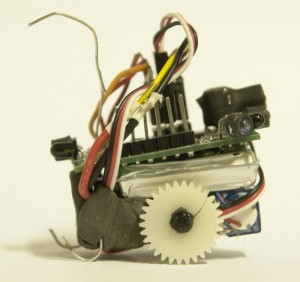