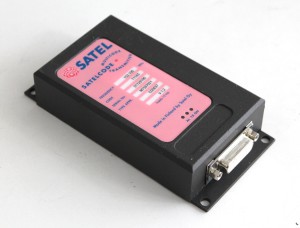 I got my hands on a broken Satel OY multicode transmitter. It is an transmitter used to get information from remote sites - alarm codes, telemetry or sensor values. You can attache it to your pump or ground station and it sends a message up to 30 km if something is wrong. It puts up to 4 W of output power to VHF band 152 MHz in FSK modulation. As alarm systems go - it also had a place for backup battery.

This device is designed and produced in the end of nineties and it can be seen from the build. Old chips and packages.

The device itself is screwed in a thick aluminium box for weatherproofing, RF shielding and mechanical rigidity. Input power and signals come from DB15 connector and all go through low pass filters for protection. It has to survive the scariest test ever - the user! The brain of the thing is socketed Atmel TS87C51RB2 in a PLCC44 package. It is a device before flash memory - only single programmable! 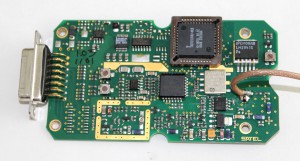 From RF section we don't find fancy transceiver chips. Frequency synthesise is done by temperature controller temperature oscillator in a separate metal can. Modulating multicode is generated by Motorola MC14515 PLL frequency synthesizer. Bunch of analog RF circuitry filled by RF inductors does the modulation and matching. The output is amplified by BLT50 Power amplifier that is used out datasheet frequencies. Do your own datasheet - typical for RF power stuff. They don't use air core inductors, so they lose a bit of efficiency, but since it is externally powered they don't care. Also TLC542 ADC is used to get some feedback from RF front end. 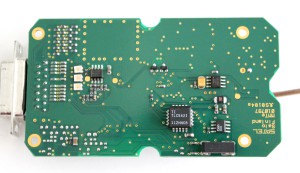 Back side of the PCB 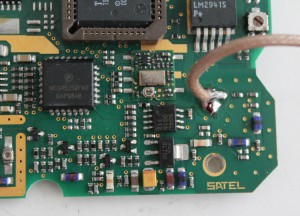 Power amplifier and insides of a TCXO

One thought on “Multicode transmitter”