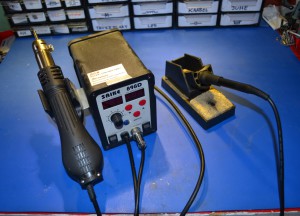 So I tore town my hot air station another day. It was bugging me that it restarted every time my refrigerator turned on. Probably a problem with not enough (if any) filtering.

Couple of screws later and it popped open. First impression - it is dirt cheap. Well, it is THE cheapest hot air and soldering iron station but wow.. It has a big transformer in its core. Transformer powers board with microcontroller, that controls the screen and buttons. Power for the soldering iron comes from different winding and is controlled by thyristor through a opto-isolator. 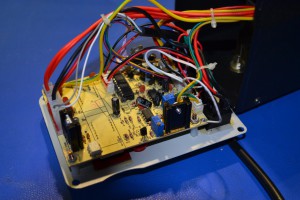 Some critisism: Single layer paper PCB, insides is a cabling nightmare. Everything is through hole, because you know - workforce is free.. It didn't even have a 7805, but a TIP122 transistor and a zener. Very weird design that I have also seen in couple of other ultra cheap Chinese stuff.

Positive side: it is really cheap - under 80 €. It works - I bough it some years ago and still no problems. All the tips and replacement parts are available really cheap also. So, I recommend it. 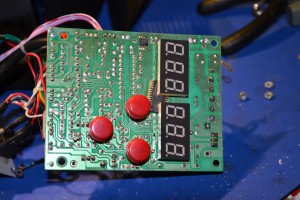 Front side of the board. Notice LED driver mounted on an angle.

The upgrade: It actually had a lot of Y2 capacitors from power lines to mains earth. But I live in an old soviet building where is no mains earth. So I added more capacitors. Mains line got a biggest X2 that I found. Circuit 5V power line got couple of big electrolytes and some of small ceramic capacitors.

I also found the soldering iron tip grounding line and added 1 MΩ resistor between it and the ground. This gave me the ability to solder live circuits. Before I had couple of nasty incidents.